I will not try to explain the serendipitous nature of life because, well, that would make me either one of those lunatics ranting on a street corner or maybe a Jesus follower. Since I’m not religious nor crazy, I’m not even an honorary member of either club.

BUT, there is a synchronicity to the Universe that never fails to fill me with wonder and I had one of those “holy shit”  (pun intended) experiences recently.

About a month ago I was walking on 11th Avenue from my Upper West Side apartment in the 70s to the Toyota dealership between 46th and 47th Street. I had my earbuds in and was listening to the music downloaded to my phone. My music is an eclectic mix—Jay Z to Andrea Bocelli and everything in between. My Prius is the one holdout to my acceptance that I’m a real 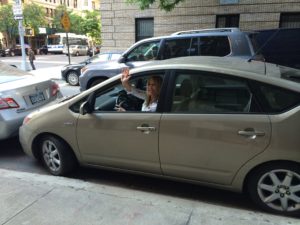 New Yorker. I don’t know many living in this city with a car but I can’t seem to let it go. As much as I love my life—never been happier with a locale—I need to know if it gets too hard, I can drive away.

So, it was time for the car to be serviced and I was walking to pick it up and return it to the garage where it will sit, sometimes for a month, without being driven. I passed the long line of people waiting for tickets to The Daily Show with Jon Stewart and it was at that moment an oldie but goodie started playing through my headphones. It was Jefferson Starship “Count On Me” and as I listened I had the strangest thought: This is the song I’ll dance to at my wedding.

Precious love, I’ll give it to you

Blue as the sky and deep

In the eyes of a love so true

Beautiful face, you make me feel

Light on the stairs and lost

In the air of a love so real

You can count on me

Count on my love

Count on my love

To see you through

Keep in mind I’m single with not even a fleeting thought of ever getting married again. I don’t see the point at this stage in my life. Of course, you do know I’m actively waiting for my next Big Love but this chick won’t be singing, “If you liked it, then you shoulda put a ring on it” so why did I have that thought? Is there a buried desire to get married that I’m not aware of? And as foreign as that seems, I would never even consider a wedding where I’m actually dancing with my legally bound partner. I mean that nonsense is for first timers, right?

I walked a few more blocks confused with that random thought while questioning my own foolishness until I decided it wasn’t the end of the world that my brain went all wonky. I reminded myself that weird thoughts are constantly popping into my cranium–and not always of 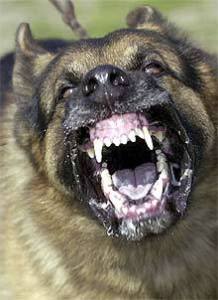 the school-girlish variety. For instance, just the morning before, an oblivious woman passed me while I was walking my dogs, and she, her German Shepard. I realized from fifty feet away that her fucking lunatic canine was out of control and as we passed it lunged, snarling with teeth bared and tried to bite, my sweet Kate and Nigel. I yelled at her to get control of her dog and she screamed, “RELAX, HE’S ONLY PLAYING!” Yeah right, you dipshit. Then I thought: I hope you die in your apartment and Cujo eats your face off.

Welp, no rainbows, butterflies or girlish wedding dances about that silent prophecy.

Anyway, it was a long walk and I gave up trying to figure out my brain. I paused for a moment and put on another Jefferson Starship song from my playlist, “Miracles.” I was fourteen when I first saw Starship at the Aladdin Theatre for the Performing Arts in Las 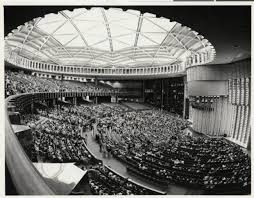 Vegas on October 3, 1976. My best friend Jill and I had a mad crush on Marty Balin and we attended with binoculars that were focused on him for the entire concert. I would’ve given anything to meet him. I knew little of love and nothing of sex but there was something about that song (written by Balin) that stirred a yearning in my pubescent mind—and body. Clueless to the acts those words were describing, I knew whatever he was singing about, I wanted. Preferably with him.

Then you’re right where I found ya (Oh, baby)

With my arms around ya (Oh, baby)

Few ever find in a lifetime

But from that very first look in your eyes

I knew you and I had but one heart (Baby)

Only our bodies were apart (It’s making me crazy)

That was so easy (Baby)

When I went down on you, girl

When I start dancin’ inside ya (Oh, baby)

At this age I listened to those same words as I meandered along 11th Avenue and knew  exactly what he was describing. Sigh.

A couple of weeks later I was having dinner with my daughter, Morgan. She had just started a new job in management and had to make some decisions that come hard with a person’s first job as the boss. As she lamented being the bad guy with one employee in particular who’d asked for time off during a ridiculously busy time, I dismissively responded, “Hey, that’s why you’re earning the big bucks, you gotta make tough calls. She can’t go. Period.”

“I know, but her stepfather has a huge show in San Francisco.”

“What kind of show?”

I figured he probably had a booth at some trade show.

“He was in some old band and they’re performing.”

“Benny and the Jets is coming to me, but I know that’s a song.”

Then I began listing.

“Is it Joan Jett and the Blackhearts?”

I dug deep for that “old band” that I figured started with a J.

“It’s not Jefferson Starship, is it?”

I could hardly contain myself as my voice got squeaky, “Is her stepfather Marty Balin?”

“ARE YOU CRAZY? THAT’S NOT AN OLD BAND, IT’S STARSHIP AND HE’S A FUCKING LEGEND!”

After dinner I made Morgan come to my apartment and listen to Jefferson Starship tunes for at least an hour. I’d obviously failed to properly educate her on quality music—although she can’t stand Taylor Swift so I’ve clearly done something right.

The next day she  shared the story of our evening before with the stepdaughter.  She loved that I 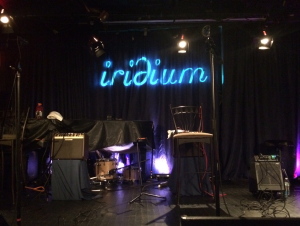 called him a legend and told Morgan that he’d be playing in the City in a month. She’d make sure we had tickets to his performance AND I would get to meet him.

On October 10th, Morgan and I attended his performance at The Iridium on Broadway and 51st. Our seats were front and center in the crowded basement room and I squirmed in anticipation. Even the portly guy to my right, much too close and spilling over into my personal space could not dampen my excitement. 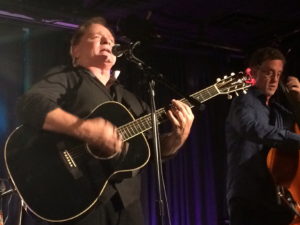 I was a little surprised. The object of my youthful lust had, well, aged. Who knew rockers got old just like the rest of us? (Except Mick Jagger, of course!) I admit I was a little disappointed and Morgan kind of looked at me like, that’s the dude who made you wanna rip your clothes off?

He began his set playing Jefferson Airplane songs and the crowd of, um, aging hippies, started rocking out. I didn’t because I’m not old enough to be an Airplane aficionado, thank you very much, and after several songs I began to regret attending. Everyone around us couldn’t get enough, though, as they sang along, grooved in their seats and leapt to their feet to applaud his Airplane revival. OK, it was a slow leap, but enthusiastic nonetheless. 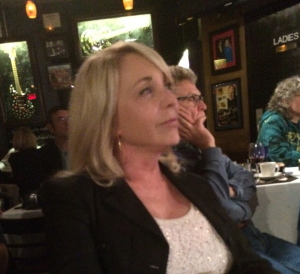 He transitioned to Starship and the first song, “With Your Love” was my undoing. I felt that stirring. Morgan leaned over and said, “Mom, your face is flushed and there’s sweat on your upper lip.” In an instant I was fourteen again, hormones raging and all I wanted 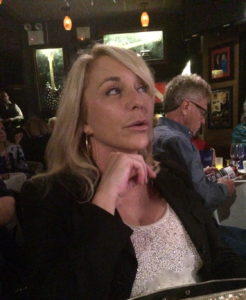 to do was tell Marty to keep singing and while he was at it, pluck my body like a string–often.

The song transformed that seventy-two year old man into my sexual fantasy in a nanosecond. The power of music is remarkable. And don’t even get me started on libido-impact when he sang “Miracles.”

When he finally finished I had the opportunity to meet him and, thankfully, got it together. I told him my daughter and his worked together and thanked him for a great performance. I also had my picture taken and promptly messaged it to my friend Jill. She replied, “OH MY GOD!” 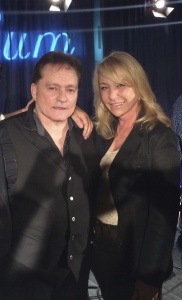 I will never stop being amazed at things many deem coincidental. The serendipitous nature of my life leaves me a disciple of something bigger than what I can see or touch. I don’t believe in flukes and will continue to recognize the outcome of thoughts and wishes as these sorts of experiences come my way.

And I will always be grateful.