My daughters asked what I wanted for my August birthday. I’m sometimes hard to buy for as I don’t want anything. Not because I’m trying to be difficult, or worse, noble, but stuff has little value anymore. My apartment is small, space is limited and I’m a minimalist when it comes to décor. I don’t have a single carpet on the wood floors. Bare looks better. I don’t want nor need anything tangible. It (the gift) should not clutter my life and must be useful in a some way. 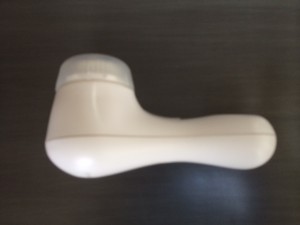 Last Christmas I asked for a Clarisonic–the basic one without multiple attachments that would surely end up scattered around my bathroom cabinet.

On my fifty-second birthday I asked for two hubcaps. Yes, hubcaps. Mine mysteriously disappeared while the car was in the parking garage. The manager was suspiciously blasé (that’s right, I’m looking at you, Joe).

For my fifty-third, though, I knew exactly what I wanted.

I asked the girls to get three tickets to the Eagles concert on September 18th, Madison Square Garden. I told them it would be “the experience of a lifetime, one they’ll carry with them long after I’m gone.”

OK, that might’ve been a slight overstatement. I recall my dad saying the same thing when he took me to see Wayne Newton at the Desert Inn. BUT, in his defense, I can still pour my heart out when singing “Red Roses for a Blue Lady”.

My girls did what I asked. Um, kind of. They bought two. Seemed neither was eager to have the GREATEST NIGHT EVER. They would flip a coin, they told me. Loser would attend. With that statement I had validation of my thoughts during their teenage years:

I have birthed the spawn of Satan.

“Fine,” I told them, “I don’t care who goes but you better sing and dance to every song. Don’t you dare fucking ruin this for me.”

When your children are twenty-six and twenty-nine, it’s perfectly acceptable to swear at them. I doggedly throw curse words their way these days because life is too short to let simple pleasures pass me by.

Chelsea said she knew the songs, but would not dance. Morgan said she might dance but only knew “Hotel California”. Morgs lost the coin toss. I would be singing alone.

In preparation for the concert I watched the documentary History Of The Eagles multiple times. I recorded it on my DVR with the “delete by” date of: hell freezes over. By the tenth time, I’d learned much personal information about the group and cursed my younger 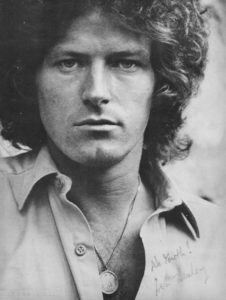 self for not having  a stronger work ethic. I should’ve at least tried to become a professional Eagles groupie. Seeing a young Don Henley on the screen, all hair and angst, was a reminder of the importance of having clear goals and objectives even when young.

To further prep, I played Eagles songs over and over. I purchased new headphones because my ears were sore from constantly wearing the worn out earbuds.

On the day of the concert I began getting ready hours before it was necessary, and that included wine. Although wearing black skinny jeans, I shaved my legs for Mr. Henley. He could look out in the crowd and spot me, after all, and I didn’t want to be hindered by two-day growth. I 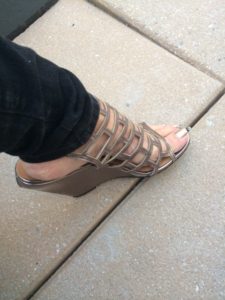 topped off my all black attire with a denim jacket because, duh, it was an Eagles concert. I also wore shoes that should be both worshipped and cursed.

My flip-flops fit snugly inside my evening bag. Only the truest fan—who’s also in decade five—would be devoted enough to lug alternative footwear for dancing.

I arrived early and it was heaven. Denim was rampant; people were old just like me. I don’t mean decrepit, shuffling along pulling an oxygen tank. It was an Eagles concert not the Metropolitan Opera. I even got a contact high from pot being smoked all around me. 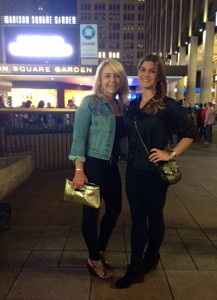 Morgan showed up and after a quick photo, we headed inside.

“Mom! You don’t have to run!” She yelled, ten feet behind.

I bought t-shirts. Quite obvious which one she picked–that disgraceful lone song she knew. 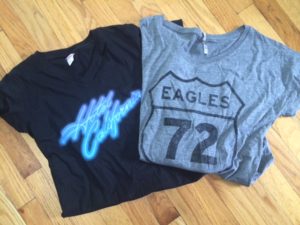 Once seated (we were in the rafters), a man walked up and began talking to three people next to me. Seems he was in the bathroom and a concert employee approached with tickets, several levels lower. He told the group (his wife and another couple) they should head down. Being a nosy person, I asked him how he got so lucky.

“I guess he just liked my face,” he said, laughing.

“Well, ask him if he likes this face.” I replied shamelessly, and he told me he would.

A few minutes later he returned with two more tickets. I couldn’t get up faster and had already put on the flip-flops.

And I question why they love to take me down a notch?

We made it to our seats and I told the man seated next to me (part of the group that got tickets) that I was probably going to sing off-key for the entire show. He said he was singing, too, but had a good voice. His wife didn’t want him to sing, he said, and she nodded in agreement. “We can sing together.” I said, happy that I’d at least have someone who knew the songs. Morgan whispered that his wife didn’t like that. Really? I didn’t think she seemed upset. Come on, I’ll do a lot of things in front of my daughter but hitting on a married man (with or without his spouse nearby) isn’t one of them. I was having fun with the person in the seat next to mine—gender was irrelevant.

The concert started slowly with Henley and Frey taking the stage for a song. Then one by one the rest of the band joined with each new tune they played. The voices were as clear, the harmonizing, pure perfection.

I have two favorite songs for two predictable reasons. “Peaceful Easy Feeling” because my first boyfriend told me the lyrics below reminded him of me.

Against your skin so brown

And I wanna sleep with you in the desert tonight

With a billion stars all around

My skin was always caramel-colored in those baby-oil-instead-of-sunscreen years. My boyfriend and I didn’t sleep in the desert or anywhere else, but I thought about the possibility.

“Desperado” is favorite number two. I played that constantly when another boyfriend and I broke up. He didn’t want to be tied down with anyone, he told me. I was sure if he really listened to that song it would change everything.

You better let somebody love you, before it’s too late

We never got back together but I did run into him many years later and he said it was one of his biggest regrets. Isn’t it great when things like that happen? We never forget.

Morgan recorded me singing “Already Gone” for your listening pleasure (I even have a twang). Actually she sent it to Chelsea during the concert because that’s how they are. 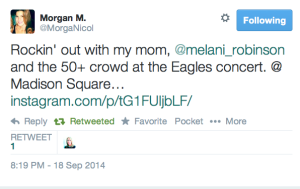 I made sure to remind her she was hearing history during the lengthy “Hotel California” guitar riff. I’m not sure this tweet showed the awe I was hoping for.

Joe Walsh had obviously been working out. His muscular arms were unbelievable. I got a second contact high because people were lighting up inside MSG. Cyber fist bump for those rule breakers.

When the band pretended to finish and thanked everyone for attending, I reached into my 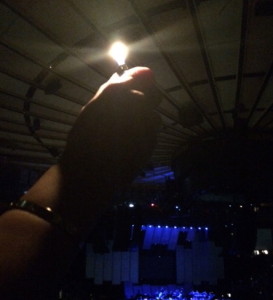 bag for the only accessory more important than flip-flops, the Bic lighter. None of that idiotic cell phone waving crap for me. I rock the flame to ask for an encore. Several people around me were wowed. “Look, she’s using a lighter!” One guy said, “Oh yeah, the lighter. I forgot we did that.” You forgot? I almost asked if he’d considered fish oil pills.

I rode the subway home, buoyant from the experience. A friend, close in age, sent an email yesterday and said he’s got to start doing more fun things like going to concerts. I replied, “If not now, when?” Isn’t that how we all should live, regardless of age? Shouldn’t we forget about the right time to do things that bring us happiness? I have no idea why I didn’t see them before they broke up in 1980. And why not when they reunited in 1994-96? I probably thought it was frivolous to spend money on an expensive concert ticket when my daughters’ needs came first. But if I ever deserved a reprieve, it was then.

Why aren’t we more generous with ourselves and why don’t we take presented opportunities to grab all the fun we can, when we can? I still have thoughts like, I’ll go back to Italy when I’m in love. That’s ridiculous. I’m certain I’ll be in another relationship but why is that the joy-qualifier? I’m going to be conscious of my whens from now on and instead, like my friend, seek fun more often. I don’t care a lick if I live a long life but when it’s over, I want to have lived a big one. Something as simple as that concert contributed to the bigness and I will be more open to opportunities, instead of timing.

Before it’s too late.

“So often times it happens that we live our lives in chains
And we never even know we have the key”  The Eagles “Already Gone” (Jack Tempchin, Robb Strandlund)