Have you ever had an agreement with a spouse or partner that if the opportunity presented itself, he or she would have permission to have sex with a celebrity? You know, this kind of conversation:

She: Who’s the celebrity you’d like to have sex with?

He: I don’t want to have sex with anyone but you.

She: Cut the bullshit and tell me who you’re banging?

He: Wow, that was fast. Are you sure? I hear he doesn’t bathe.

She: Yep, in a heartbeat. Now you.

She: Little young, but I get it. Her breasts are amazing.

Then they both agree that if they happen upon that celebrity (and sex is an option) they have a “hall pass” to screw to their heart’s content. Who knows, it may even become a game they play that night? She puts on her Wonder Bra while he calls her “Scarlett” and she asks him to wear a cowboy hat and a look that is a combination of angst and lust as she calls him “Tristan.” 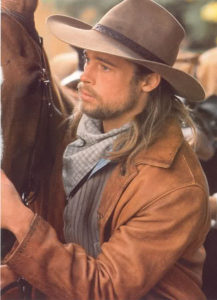 We know who’s more imaginative in that fictional relationship, right?

I matched with Sean on Tinder about a week ago. Not only was he handsome, his blurb made me laugh:

Englishman in New York. What does a stranger do in a strange town? Smile first and who knows where it will lead us! Don’t worry…I have my own teeth…Even straight ones.

Having been deluged with opening lines such as:  Hello, Hi, Ur beautiful, we were off to a good start with his:

How can I be smart and witty? I’m English!

(FYI, my blurb states that I’m seeking someone smart and witty.)

Then he followed with:

Btw…Did you manage to get some ointment to cure those nasty blisters you developed on your 3rd photo? Man, they look painful. 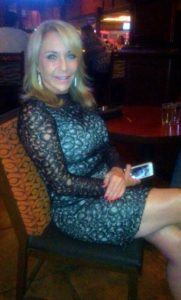 Laughed out loud. Of course, I was a goner. We began a delicious back and forth texting exchange that had me smiling, laughing and stretching my brain to come up with replies that were equally clever.

There is no question I am seduced by words–I’m a writer, it makes sense. “Sapiosexual” is a description I often see in profiles. When I read it an immediate eye roll follows.  It feels like the user is trying too hard to let women know he’s smart, because what dummy is turned on by intellect? Whatever, dude, don’t tell me. Show me. I guess when reflecting, I’m Sapiosexual-ish. Intelligence is a huge turn on but my guy’s got to be funny AND physically attractive (only by my standards, of course). Then we have to have that tiny little thing of mutual chemistry. Might explain my perpetual search, right?

Well, Sean was the whole package and I was hoping he’d ask me out to see if we had the chemical magic. Then I learned some disappointing information. 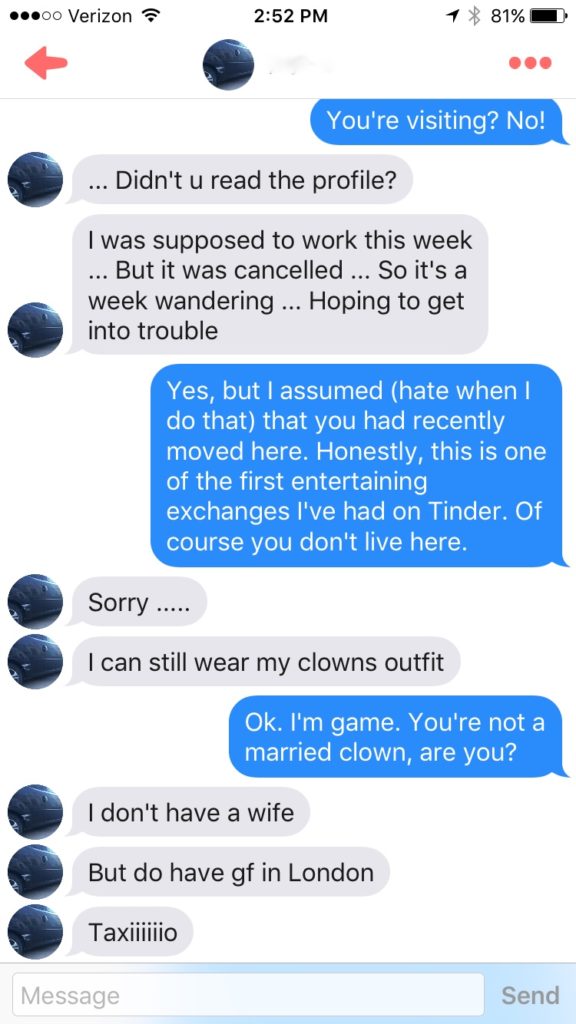 He avoided the question so I asked again.

And quickly followed with the text below. (I’ve deleted his name following the comma after “you” because you know I change all names):

Finally Sean decided to answer my question. He told me he didn’t want it to sound like the predictable, “My wife doesn’t understand me,” and also made sure to emphasize, “Now that I know I won’t be maneuvering into your panties, why would I lie?”

He explained that his girlfriend and he hadn’t had sex for two years. It became too painful for her after menopause. She also has zero desire. She tried hormone replacement, which made her lethargic and gain weight. She’s now given up. He added 1:3 women are impacted in this way. He’s right about that number.

Sean told me, “I love her. She’s my best friend, but I still miss sex.”

Before this trip she said she wouldn’t be checking up on him and he should do what he wants when he’s away.

Sean was given a most unusual hall pass—a generosity I probably wouldn’t be capable of bestowing upon my partner.

I told him there are many options she’s not tried and began to list a few. He asked if I would be willing to meet him for coffee and conversation and added that he understood it was strictly platonic.

Guess what? I met him.

We went to my favorite neighborhood bistro, sat at the bar and talked about everything. It was the most honest, open and frank conversation I’ve ever had with a complete stranger. Three hours of deep subjects, lots of laughter and three glasses each of delicious rosé. It was real, gritty and refreshing.

Then Al Pacino walked in for a late lunch.

No, seriously, I swear.

All alone. Wearing that jacked up headband, too. 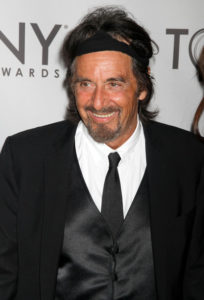 We were sitting at the bar and he took a booth in the corner of the restaurant. We were briefly intrigued but the thing about New York City is celebrities are usually left alone. Perhaps it’s that New Yorkers are a tough crowd and few things (or people) impress them? I’m not sure but I will say that I regularly see famous people and nobody is bugging them for an autograph or selfie.

Sean and I turned away from Serpico finished our third glass of wine, talked more. We have decided to be friends and I hope he contacts me again the next time he’s in New York City. I also hope he is able to talk his girlfriend into trying the different options I suggested. If I had no sex drive I would be all over it. If Sean were my boyfriend, he’d have no need for a hall pass.

Even with Scarlett Johansson.

“I hope they make a video game of me. At least I wouldn’t have any cellulite then.”  Scarlett Johansson