The first week in February a senior editor from THE HUFFINGTON POST contacted me. The “Women” section would run a series for Valentine’s Day, “What I Know About Being Single Now That I’m In My 20s, 30s, 40s, 50s.” The editor was selecting one writer for each age category and I was very happy to hear she’d selected me for 50s.

I thought about the predictable things I could state.

2. I’m finally confident in my ability to choose the right partner.

4. Friends are just as much fun as a man.

5. I know what I’m looking for now more than ever.

6. I’m in no hurry. The biological clock has quit ticking.

I try my best to tilt away from banal and that’s gotten me into trouble on both the online dating blog and THE HUFFINGTON POST. Seems nothing “stokes people’s hate fire” more than opinions that go against the grain. If you need proof, look at the Comments section of some of my more provocative pieces. This essay, though, didn’t seem to piss people off as much as others had. The comments were fairly mild in both number and tone. I always gird my loins when I publish a piece and it seemed this time the girding was unnecessary.

Sure, I had one comment on Huffpost from a man named “Windy Daze” who tried to rough me up. I don’t remember exactly what it said because it was “flagged as offensive” almost immediately and removed, but I think it went something like this:

“As a happily married man of more than 50 years I will tell you that relationships ARE hard work. I work hard every single day and NEVER take my wife for granted as you so ignorantly said. You have a lot to learn, MISS ROBINSON. Who do you think you are? You know nothing!”

I respond to every comment on my blog but I pick and choose on THE HUFFINGTON POST. I usually thank some who’ve left kind comments but I also go right back at some of the more insulting ones.

I know, I know. I should simply ignore those rude commenters since the attention fires them up and they keep coming back for more. But that’s conventional wisdom and I don’t buy it. What I’ve found is, if one person is bold enough to leave an offensive reply it can quickly become a feeding frenzy of cyber-courage when the more tentatively acerbic see blood in the water. For every one person willing to post something detestable there are many others who would like to say something inflammatory but lack the guts—until someone else crosses the line ahead of them.

I don’t have a problem with those who disagree with me. After all, my writing simply reflects my opinion. What annoys me, though, is when it gets personal or the reader makes assumptions based on their circumstances—as was the case with “Windy Daze.”  I replied to his comment but since his was removed, my response was, too.

Here’s what I said:

“That might be your reality, but it wasn’t mine, mister. And where did I say I took my husband for granted? Go back and read the essay again, Windy Daze, and next time try a thorough read before waxing poetic in the Comments section. I get the feeling you want to put me in my place. Never gonna happen, you daffy ole bag of windy.”

Part of me felt a little sorry for the gusty one. I can’t imagine conjuring up CAPS rage unless something about the piece hit home. Maybe what I wrote caused our intrepid husband to have a fleeting thought that the strife of his marriage was not saintly devotion, but “miles in manure.” Nonetheless, the rest of the comments were mostly positive, and even when not they weren’t off-putting.

I was confused. Was “rat copulation” a new expression I’d never heard before? I went to Urban Dictionary, searched and found nothing. Then I searched “rat fuck” to see if I could get a definition of what Andrew Soto meant. Here’s what I found: 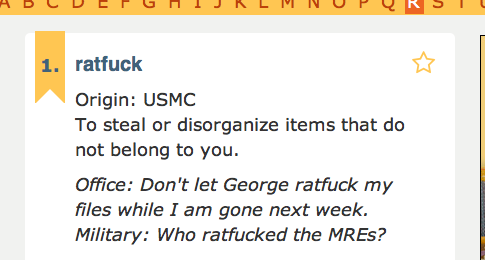 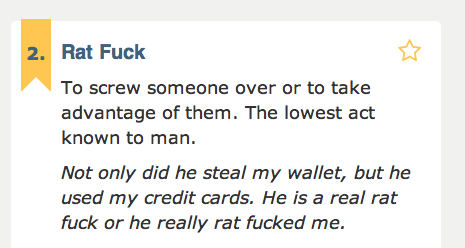 Nope, I don’t think that applies, either.

Other readers took Andrew Soto to task so I didn’t ask for clarification. One questioned when his article would be published; another called him a “douche.” Although one powerhouse wordsmith wrote “big whoop” about an article in THE HUFFINGTON POST since they don’t usually pay and then qualified his comment by letting everyone know he’s a “published author and a well-paid editor.”

I guess I’ll never know what Andrew meant by rat copulation but I don’t think it was complimentary. I have my opinion as to why Andrew Soto left that comment. I think Andrew feels insignificant and for one brief moment as his fingers typed away he got a rush, maybe even a boner. He felt more substantial hopped up on cyber-courage. Or, maybe I’m getting too analytical and he’s just a douche.

BUT, I am 100% certain he would never have the balls to say it to my face.

Whatever the reason, The Andrews or Windy Dazes of the virtual world will continue to spew their venom—especially when nobody calls them out. I know I will continue to do so and it’s my hope that some of you will do the same. The next time you read a defamatory or overtly asinine comment following an article you’ve enjoyed, I hope you’ll let the commenter know how you feel. I’ve found it usually shuts them up along with their less ballsy cohorts skulking through the comments trying to muster the nerve to be nasty. I have the luxury of blocking idiots from my blog and Facebook page and I blocked three from www.1yearofonlinedatingat50.com and none, yet, from this website. I don’t have that option when another site publishes my work. You’ll be doing a service to all writers who provide free entertainment. I don’t think anyone penning an opinion piece expects all to agree, but what’s wrong with a little civility when being contrary or even the radical move of simply clicking away to something more to your liking? Cyber-courage is an epidemic and I think it’s time we develop a vaccine.

“When a bully is held accountable for his actions, his future actions will change. Bad behavior only continues for those who allow it.” Gary Hopkins