As I stepped off the plane and into the jet bridge the sunshine streaming through the small window reminded me of where I was. Home. It was wince-worthy and I mumbled a curse word or two as I diverted my eyes. Growing up in perpetual sunshine I craved gloomy overcast days. 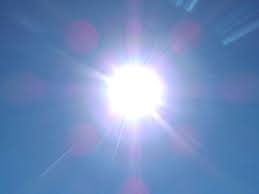 My father was having health issues and I’d returned to Las Vegas to spend time with him. His wife was traveling and he shouldn’t be alone.  It is a painful thing to witness the inevitable decline of a parent. The loss of dignity in the aging process sometimes feels like a kick to the stomach especially when the father has been the invincible one.

My dad’s home abuts a mesa where I used to walk my dogs every morning. It was the desert at its best—rabbits, lizards, snakes and even the occasional coyote. It’s been almost four years since I trekked through the sagebrush and stepped around the occasional abandoned mattress–dumped by someone not wanting to dispose of it properly—and it felt odd to be back.  A lot had changed. I took my dad’s elderly dog, Buffy, out for a daily walk in the “new and improved” Whitney Mesa. It’s become a park filled with paved walkways, grassy areas, picnic tables and a playground. They’ve even put up warning signs. 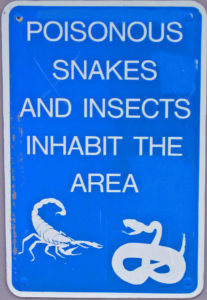 It’s quite lovely and exceptionally clean but the wildness is gone. 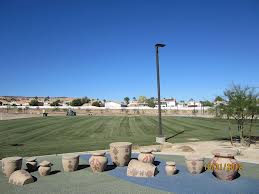 My last visit to the mesa before leaving for New York City four years ago included the perfect sendoff. For several months prior to my departure each walk included a lone coyote. I’d see him in the distance out of the corner of my eye and then he’d disappear into the brush or his den. I’d seen many coyotes growing up in the desert, but he was the largest and his coloring was not the typical light brown, he was almost white. 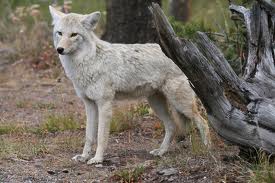 It made me a little nervous but he was always a respectable distance away. Still, I took to carrying pepper spray just in case.

On that last day in late August everything changed. I found out later from one of my dad’s neighbors that he’d taken a mate and they thought there might be pups. The coyote had little fear of humans as some had been feeding him. Big mistake. This time he brazenly stalked my dogs and me. He followed about fifty yards behind us and when I stopped and turned around he would pause, as well, while boldly staring me down. I did not feel safe and I knew he probably intended to make a meal of Kate. I also had my daughter’s dog Lola, a tasty pug casserole, indeed. 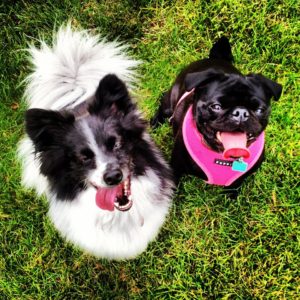 As the coyote began closing the distance between us I realized that he wasn’t going to let me walk out of the mesa before making his move and the gate leading to my father’s street was too far away to make a dash for it. I also remembered what my idol Cesar Milan said. “Once you start running you become prey.” 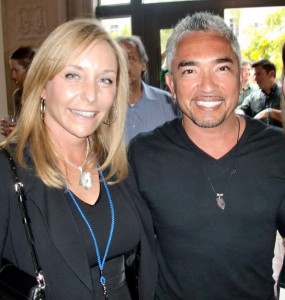 He was about twenty yards away and I pulled the dogs closer as I whipped around and stared him down. “GET OUTTA HERE,” I yelled, stomping my feet and waving my hands while channeling Barry White’s deep voice. The coyote began barking—an eerie sound that was feral with nothing dog-like about it. It seemed to go on forever and my pack was terrified.

That could give you nightmares, right?

Party girl Lola had her ears flat and her head low and Kate was next to me, quivering with her eyes on the predator. I continued to yell and stomp and he kept barking. The hair on the back of my neck stood up with his unnerving wail as it reverberated off the sandstone walls surrounding us. 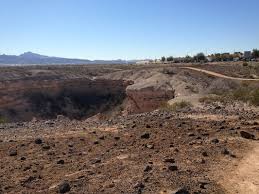 I looked around for some sort of stick to use but there was none so I picked up a rock and hurled it in his direction. He yelped in surprise as it skidded next to him. Then he was silent. I waved my arms some more and growled, “GET GOING,” over and over as I looked around for another rock. He seemed to know I was going to throw something else. His ears flattened, his head dropped as he slowly, ever so slowly skulked away.

It was finally quiet and I think I could hear my heart pounding.

Then the clapping and cheering started.

I hadn’t realized there was an audience. Two neighbors were in their backyard watching the standoff behind the cement block fence that bordered their home.

“He’s been getting more and more aggressive,” they shouted.

I felt sort of proud, kind of Annie Oakley-ish, but it was also confirmation that the change I was making was the right one. I wouldn’t have gone back to that mesa again with the dogs as long as the coyote was there and with the housing boom the desert had turned into one big tract home development after another, encroaching on the wildlife that was there first.

It was as if that coyote had had enough.

I respected his bravado.

The following morning I got in my car and started my cross-country drive to the Big Apple. I thought about the safety in walking Kate on the streets of Manhattan. Little did I know she’d get out one night and end up alone in Central Park where–I was shocked to learn–there have been numerous coyote sightings. 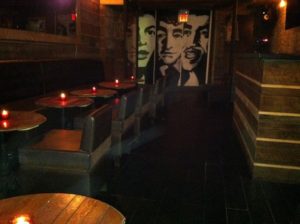 It was great fun. If you’re interested in what some of the attendees had to say about the experience, click on the Boot Camp tab to read their testimonials. I’ll add more as soon as I receive them. I’m holding another towards the end of April or beginning of May. I haven’t got a firm date yet, but if you’re interested in attending (or know someone who might be) just shoot me an email through the contact form on this website and I’ll get the information to you once I’ve settled on the date. I’m also doing some private consulting and I’ll soon be posting a testimonial from my first client. Who knew I could take my year of blogging and turn it into something like this? I guess it makes being scarred for LIFE almost worth it. Ha!

“We have to instill fear of people back into coyotes.” Paul Curtis