Yesterday I was waiting to checkout at the Trader Joe’s in my neighborhood. It’s the busiest in 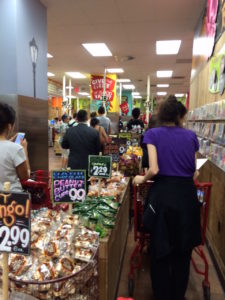 the country so the line winds around the store. Instead of my favorite pastime of playing Tetris while waiting, I engaged in my second favorite—judging others and the food they’re purchasing.

Come on, you know you do it too.

I observed the bratty kids and thought, you’re lucky I’m not your mother—or, ugh, grandmother. I perused the cart of a svelte woman and surmised that I too could be a rail if willing to eat only the multiple bags of kale she had in her basket. Who eats that shit anyway? And even if you do, you can’t possibly enjoy it. All that endless chewing of something that was once a garnish in every buffet in Las Vegas. I also saw a young married couple looking so miserable (as he stood 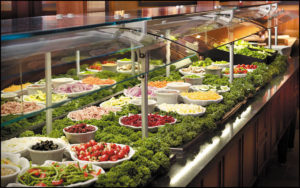 in line and she placed items in their cart) that I felt like tapping them on the shoulder to say, “Rip the bandage off and hire lawyers. You’ve lost that lovin’ feeling.”

Then I saw the man with avocados. He had three in his hands as he walked back to his place. He held them up with glee and smiled lovingly at someone behind me. I surmised that he and his love were entertaining guests that evening and guacamole was on the menu. He’d found three that were perfectly ripened and that pleased him immensely. I thought, Aww, I want someone to smile at me over produce. He had a happy Yoda-ish face and I quickly amended my original wish.

I want a handsome man to smile at me over produce.

Then I saw his Ecco sandals. 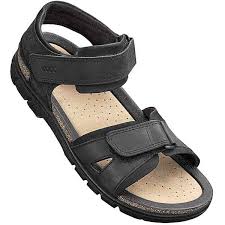 I want a handsome man to smile at me over produce and one who’d never wear those heinous sandals.

I adjusted even more.

Then I harshly generalized. 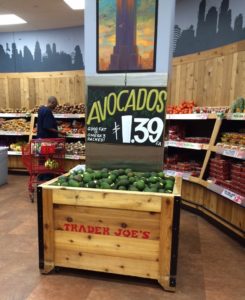 Avocado Romeo and I were in two different lines and he caught up and then went ahead. I looked for his partner, expecting to see a sweet-faced woman, glowing with love while wearing sensible footwear. He was alone and I decided his significant other had gone to grab a jar of salsa or tortilla chips.

I’m telling you, I can build a story without a single fact.

I kept watching, waiting for his partner to join him and then something odd happened. He held the avocados up just as he had before, and grinned joyfully.

What the hell is he doing, holding them up like baby Simba?

He placed two in his basket and took one in his hand, put it near his ear and knocked, then smiled extra big. He did the same with the other two.

OK, this guy’s a flippin’ nutjob.

Listen, I sincerely appreciate a perfectly ripened butter fruit, but, sir, have some self-control. If a man can’t maintain his sanity over Trader Joe’s produce, there’s no telling what he might do in Duane Reade’s seasonal aisle. One of those spray bottle fans could send him into a euphoric state he might never dial down.

New Yorkers are unfazed by crazy. That’s comforting. I like to know if I go all Mrs. Havisham (always a possibility), the city will embrace me. Especially as I approach my fifty-fourth birthday. Did you know she was only in her mid-fifties? You’re a cruel man, Mr. Dickens.

After paying for my groceries, I didn’t lament lugging the heavy bags home alone as I normally do and in fact was temporarily grateful for my spinsterhood. One can never tell the eccentricities lurking under the surface of what appears to be a perfectly normal man—be it a foot fetish, the furry scene or an uncontrollable yearning to worship Persea americana.

I always thought I was going to end up an old spinster, with my cats and fur coats. Gemma Arterton