Yesterday was the first day of spring–and it snowed. I can’t think of a more perfect analogy for the current state of my love life.

I’ve been on many first dates lately—all that began brimming with hope and anticipation of possible growth into something more. Rather like the delicate jade-colored leaves that have begun to appear on the honeysuckle vines planted on my terrace. The ones I know will turn a darker shade of green as they grow and cover the trellis just as they did last summer. 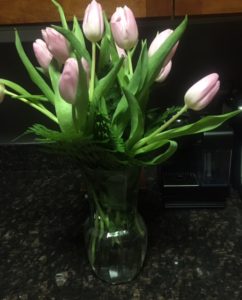 There was the date on Valentine’s Day with a lovely man from Boston. Sure the distance was an obstacle but I’d successfully dealt with that before. I was hopeful, but in his desire to learn more he did something I wish he hadn’t: read every single word I’d ever written and thought he knew me. I can always tell when someone has read my stuff. There’s a false familiarity that makes me squirm. I always ask men to hold off on reading my work and instead form an opinion based on our dates, but he was a master Google-er and had done so before our first meeting. He sent me a bouquet of tulips two weeks later when I wasn’t feeling well, (flower choice was prompted by a blog post from two years ago about my late husband giving me tulips). It turned creepy. His intentions were honorable, for sure, but the depth of his digging left me feeling as if he’d rummaged through my underwear drawer or read my diary.

Then there was a douchebag writer who had me fooled for a minute. He asked lots of questions, and after thoughtfully answering each one; he implied that I was monopolizing the conversation. He also got offended when I made a generalization about writers and the reasons I don’t usually date them 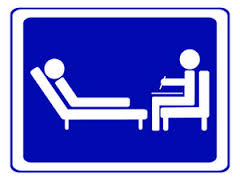 . Believe me, my research may not be scientific but I’d bet the farm on its accuracy. Did I mention that he mentioned (four times) that he was in therapy? All within the first thirty minutes of the date, mind you. Or that he made a joke about a well known sexual predator getting sex during a time when he wasn’t getting any at all? Maybe I’m too judgmental because after all he writes comedy and there’s nothing funnier than rape humor, right?

Next I had a date with a kind and handsome man who’d graciously understood when I had to cancel our first date. When we eventually rescheduled I was looking forward to it. Five minutes into our date I knew there was nothing wrong with him but I felt absolutely zero chemistry as we sat next to each other at the bar. He kept brushing my leg with his and at one point took my hand. Awkward. It didn’t help that there was another man who’d passed by on his way to an empty seat and we exchanged mutual holy-shit-you’re-hot eye contact. Each time I glanced that stranger’s way, he was looking at me with the same intensity. I finally turned my chair away from his distracting and enticing gaze so as not to be rude to my date. When our evening ended I split the check. It was fair, as I had no intention of dating him again. He even said, “There’s a theory that when a woman splits the check on a first date there’s not going to be a second.” We parted with a kiss that went quickly from first date appropriate to “Oh god, don’t use your tongue!” I pulled away and headed to my apartment as he waited for an Uber. As I walked I thought about the man at the bar and a missed opportunity. I stopped for a moment and looked back to see if my date had gotten his ride. He hadn’t and caught me looking back. I felt guilty and wondered if he’d figured out I was contemplating a return. I turned and continued to my apartment but once there I asked my doorman for a Post-it and wrote, “I was on a first date but you definitely caught my eye. I think I caught yours, as well. If I’m right, I hope you’ll call.” I signed it, added my cell number and headed back to the bistro, certain that my date’s Uber had arrived. I skulked around the corner and was relieved to see he was gone.

Unfortunately, I discovered the handsome stranger was nowhere to be found either. I asked the bartender if he had moved to the restaurant for dinner. My plan was to walk up to him, hand him the Post-it and exit. He was with a male friend and I had no desire to be intrusive. She told me he and his friend had left. Dammit! She also said, “He’s in here all the time but I think he’s gay.” Perfect. I told her that I believed we had a connection. The restaurant manager (definitely gay) was passing by so the bartender called him over and asked, “Are the guys who were sitting here gay?” He rolled his eyes, “Of course they’re gay.” 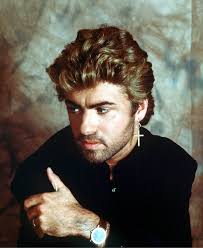 There you have it: my guaranteed attraction to a gay man with whom I am certain is straight. It is a theme that started with Boy George, continued to George Michael and is clearly still going strong.

The following day I turned off Discovery on my Tinder and Bumble accounts. If you’re not familiar with the apps, that means my profile is hidden. I’m in need of a break. Early this morning, with my puffer coat covering my pajamas I headed outside to survey the snow damage to those new, fragile honeysuckle leaves. Some had browned overnight as they gave up and succumbed to the freeze, but other tenacious ones were still hanging in there with a defiant “screw you” to the unpredictable elements. 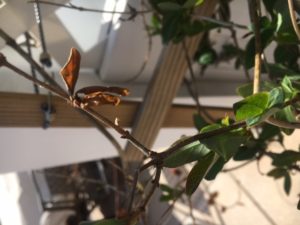 I sit here at 11:35am (still in my pajamas as I type this). And as it pertains to digital dating and the precariousness of the process, I wonder:

Which leaf am I?