It’s almost Christmas, I haven’t gotten a tree and the most I’ve done is drag my decorations out of storage. Actually, I didn’t even do that. Chelsea came over and was kind to her mama. For the last week, multiple bins have been stacked in my already small apartment. I frequently bump them when I stumble to the kitchen in the middle of the night to get water. I scream, “FUUUUUUCK!” (Sounding distinctly like Regan in “The Exorcist”), I diligently study my toe to be sure I don’t need to snap it back into place and slowly limp back to bed.

I’m trying to gather the energy to do the decorating but NYC isn’t exactly cooperating. Today it’s 61 degrees. Seasons are new to me since moving from the desert, and dammit, I want my Christmas cold. I’m also having an, um, “crisis of conscience” over the tree. Ok, that’s probably not how most would define it but those friggin’ tree vendors want to charge $90 for a five-foot 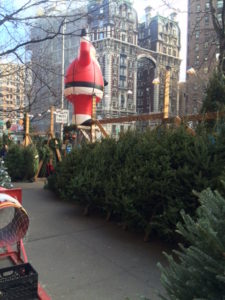 tree. I could buy two coats for the homeless with that money! I walk by lots on the sidewalks of my neighborhood, spy the perfect mini pine and ask the cost. The price never changes but I find my reaction getting more dramatic. The first time I pointed, feigned surprise and said, “Oh, ninety dollars for that tree?” a few days later it was, “WOW! Price jump this year?” And it’s now morphed into a spectacle that includes reeling back from the tree (like it’s covered in ticks) the requisite exaggerated shock, Whaaaaat?!” Followed rapidly by, “That’s insane!” as I walk away vigorously shaking my head with such flair that I am quite sure others on the street are thinking the same of me. 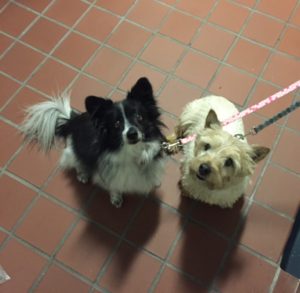 “She’s such an asshole.”

I do this most mornings as I return from Central Park and have no clue why. Do I think there will be a Tuesday flash evergreen sale? Am I hoping the seller will be less shady on Wednesday? It’s gotten so bad that Kate and Nigel pull to cross the street as we near the tree lots.

When dogs get embarrassed, you’re clearly an asshole. 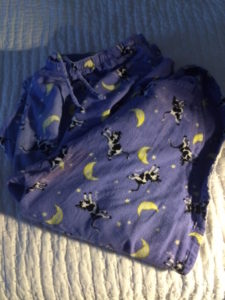 My girls and I have a tradition on Christmas Eve. We call it Flannel Pajama Christmas. Now, this isn’t a longstanding practice but one we made up last year. Here’s how it goes. We get in our pajamas on Christmas Eve around noon. I prepare a spectacular feast of only our favorite things and we eat together in a relaxed, laidback way—avoiding the pomp that has always accompanied our Christmas Eves.

It was an ordeal that included large groups of friends and neighbors, a lavish (yet tastefully) decorated Pinterest-worthy table, and a hell of a lot of stress. Last year we made the decision to take it down a colossal notch and it was perfect. I think it will 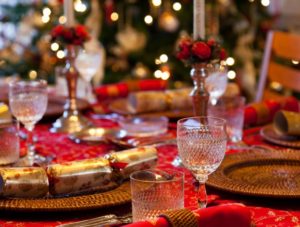 now be a family tradition long after I’m gone. Imagine that? My grandchildren, their children and their children’s children eating their meal in flannel pajamas on Christmas Eve and maybe remembering their odd great, or great, great grandmother who started the awesome folly? Or they’ll hate it and curse me, but I’ll be dead so who cares?

We also have included the movie “Love Actually” as part of the evening. Others, too, but that is the first one we watch—with plates propped on our laps.

(This is all my transition to the breakup, so hang in there. You know I always weave it around and then back again.)

If you’ve watched the movie you’ll remember the scene when Jamie (Colin Firth) and Aurélia (Lucia Moniz) have a conversation in different languages and don’t understand what the other is saying. Here’s the scene:

In the movie they find a way around their cultural differences, both learn a little of the other’s language and it ends with a proposal. Yeah, that’s the cinematic version. Unfortunately, it didn’t end that way in my relationship. He didn’t understand me. Although we were speaking English, we needed subtitles.

He gave me a book hoping it would lead to a better understanding of his world. 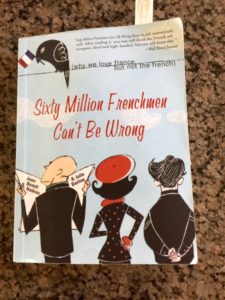 I read it, gained insight into the many subtleties of French culture, but unfortunately, I didn’t have a handbook for mine. He has been in the U.S. for eight years but has dealt primarily with French clients. Americans were in general confusing, he proclaimed. He said we were very similar to Brits in that we say one thing but there’s another meaning, an almost false politeness.

Now, you know I’m direct, often blunt, but I realize he was right. There are many nuanced meanings to conversations that would be difficult to understand. For example, when I say, “Oh, you’re tired—again. You’ve been yawning during every conversation this week. Why don’t we get off the phone so you can sleep.” What I’m really saying is, “I’m sick of you being tired so don’t call me and yawn in my ear because it’s rude and annoying.” But that message didn’t register, he insisted we continue to talk, the yawning persisted and I ended up feeling aggravated. Lather, rinse, repeat.

He also didn’t know I was funny. I have the ability to deliver a quick comeback or observation that (if you will pardon the bragging) is goddamn funny. He never got it. I continued to “think funny” but stopped verbalizing. What was the point? I realized that not only does the person  I’m with have to make me laugh (and he did); he also has to crack up at my jokes. Period. No exceptions.

There is no bad guy in this breakup. I care deeply for him but I am certain the longer we were a couple, the more frustrating it would become. We were together for six months and I began to feel that “I’m about to jump out of my skin” sort of sensation, regularly. He said (when he realized I was getting aggravated), “Let’s have this conversation in French and see how clear it is to you!” That was fair and he was absolutely right.

I want to be honest. I miss him and my Christmas tree lot behavior probably has little to do with the rip-off $90 five-foot tree. Although this was the right decision, it doesn’t make it easy. I have been alone for a long, long time and being with him made me realize how much I’ve missed having a partner. It was comforting and good in many ways. 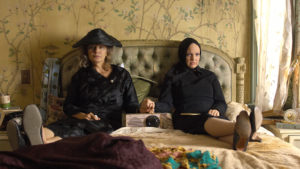 So, on Christmas Eve, in my flannel pajamas with my girls present AND Morgan’s boyfriend (hey, we’re not completely “Grey Gardens”), I’ll watch “Love Actually” with new eyes.

I’ll see the scene I shared above that always makes me laugh, but it will also be poignant this year. I’ll understand the importance of language in a relationship and my desire to be understood. Not simply using a translation tool but on a deeper level. I have discovered I am the sort of person needing one hundred percent comprehension.

I’ll probably buy that tree this week, too.

“Falling in love and having a relationship are two different things.” Keanu Reeves